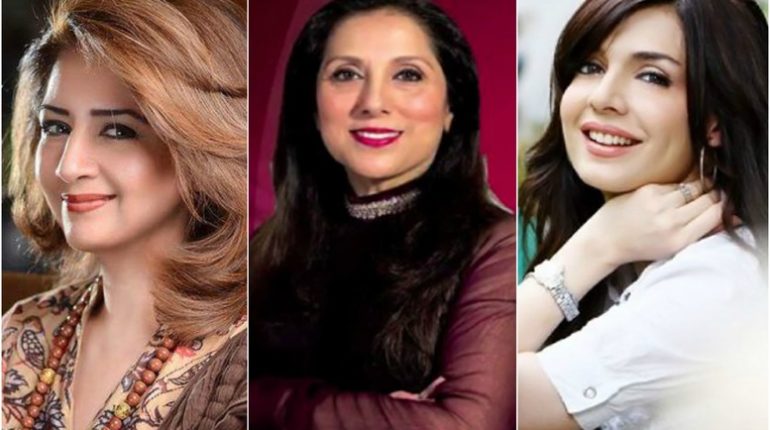 5 Stylish Women Who Prove That Age Is Just A Number, From the gorgeous Mahnoor Baloch to charming Nadia Khan, here’s a list of our favorite all-time stylish divas

Beauty lies in the eyes of the beholder but it also lies in the way you carry yourself. When it comes to the entertainment industry, there are a lot of celebrities who know how to capture our hearts with their persona, amongst which following are the ones that are worth mentioning because they have been reflecting style and personality with exquisite finesse with consistency over the years. From the gorgeous Mahnoor Baloch to the charming Nadia Khan, here’s a list of our favorite all-time stylish divas who have always entertained us on TV with their spectacular performances and acting skills and for whom age is just a number!

Currently hosting her online show titled, “Rewind with Samina Pirzada,” she is the queen of everyone’s hearts. Her elegant persona is what makes her different from all. We have seen her in a lot of hit serials like Zindagi Gulzar Hai and Dur e Shehwar to name a few where she has impressed us with her performance.

A post shared by Lollywood Superstars (@lollywoodsuperstars) on Dec 8, 2017 at 10:31am PST

Debuting her career with Marvi that was directed by Sultana Siddiqui, Baloch instantly became the apple of the eye. Role after role, she garnered success and praises from everyone inside the fraternity. Age is merely a number for the starlet as she exactly looks the same even after decades. The lady is all set to make her comeback on Hum TV with Muneeb Butt and we are eagerly waiting for it.

Currently pursuing her professional career as a stylist, Atiqa Odho now owns a makeup brand to her name. Not only she has served in the makeup industry but also has great dramas to her credit including the ever so popular Humsafar. Besides, she is also engaged in philanthropic activities. Irrespective of her age, she stills looks beautiful and elegant like ever!

Nothing is as glorious as sunlight 🧡 #lightislife 🙏🏻🙏🏻🙏🏻 thank u god for all the blessings of life !!!

Our childhood has been spent watching Rubina Ashraf’s Pas e Aina where she had played the character of a police woman and since then, she has numerous fans. Rubina is liked by people because of her immense acting skills and she is still being considered as one of the gorgeous ladies of the industry.

Taking the entertainment world by storm with The Nadia Khan Show, Nadia Khan has won the hearts of people over a long time. Her recent appearance in the drama serial titled, Aisi Hai Tanhai marks her comeback in the industry after many years. Currently running her own YouTube channel, Outstyle, she is making people aware of the latest styling trends, etc.

Which celeb is your all-time favorite, style-wise? Let us know in the comments below!