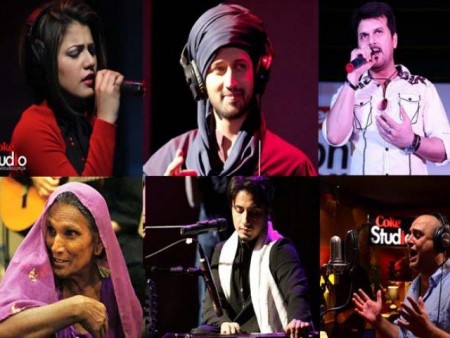 It has been revealed that 8th edition of productive music show coke studio is about to come. Almost every time the show ends, it grips all its followers for anticipation of next show.

Coke studio is set to feature a host of Pakistani music icons, such as Ali Zafar, Atif Aslam and Ali Azmat. Many local artists are expected to make their debut in coke studio 8. Pop star Ali Haider and ghazal maestro Ustad Hamid Ali Khan will perform 1st and will rock the show.

According to a source, Ali Haider and Sara Raza will perform for a duet of his song “Jiya Kare”. Ali Haider has confirmed his participation in coke studio season 8. He will perform on three songs in the show. He wouldn’t sing his signature tracks “Qarrar and Purani Jeans”. Khalid khan will not participate in coke studio 8.  Ali Zafar will also be singing a duet with Sara Raza Khan. He’s joining the show after five years. During the last eight years, Coke studio has promoted Talent. This time coke studio is promoting talent of Asim Azhar and Sur Kshetracontestant Nabeel Shaukat Ali. Ali Azmat will be singing an original composition by the producers called Rangeela. Umair Jaswal will be singing with Qurrat-ul-Ain Baloch in “Sammi Meri Waar”. Classical singer Farida Khanum was expected to sing “Aj jaane ki Zid na kro”, but she was unable to. Other Artisits, expected to perform in Coke studio 8 are Mekaal Hasan Band, Mai Dhai and Mulazim. Bassit Khan who left the season due to cervical pain is replaced by Kamran ‘Mannu’ Zafar who was part of a house-band. Coke studio 8 is expected to go on Air between Edi-ul-Azha and Eid-ul-Fitr.

Here is a list of songs being performed in Coke studio season 8:-