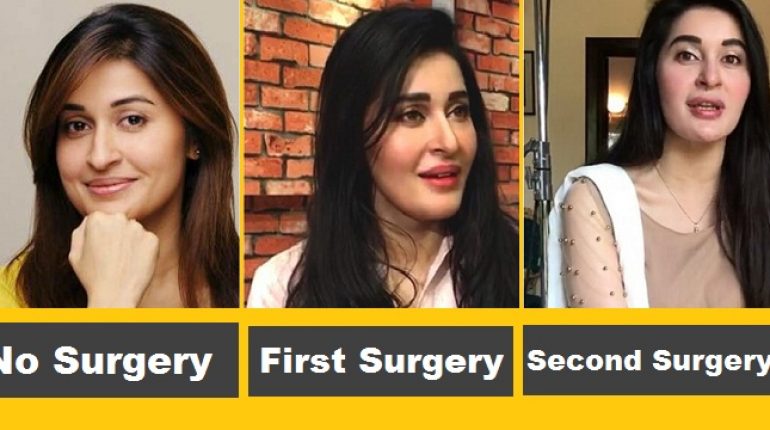 Shaista Adnan (popularly known as Shaista Lodhi) is a famous Pakistani morning show host, tv presenter, and an actress. She started as host with Good Morning Pakistan on ARY Digital. Later on, she joined GEO but her show was suspended due to blasphemy charges, and she left Pakistan. In June 2015, Shaista tied the knot for the second time after parting ways from her first husband in 2012. She married her cousin Adnan in South Africa, and year after her marriage, she came back to Pakistan and made her come back in morning shows by hosting “Sitare Ki Subah” on Hum Sitaray. Nowadays, Shaista Lodhi has done her acting debut in drama serial “Waada” opposite Faisal Qureshi and Saboor Ali, and she has again started her morning show on GEO Tv.

Here I am going to share some before and after surgery pictures of Shaista Lodhi. She looked beautiful with her natural looks, but botox treatments have ruined her looks. Most of us are shocked to see her new look after the second surgery in drama Waada. After the second surgery, her lips have become more fuller, and a small botox pimple has also appeared above her upper lip. Many people refer this black spot on her upper lip, as a side effect of botox.