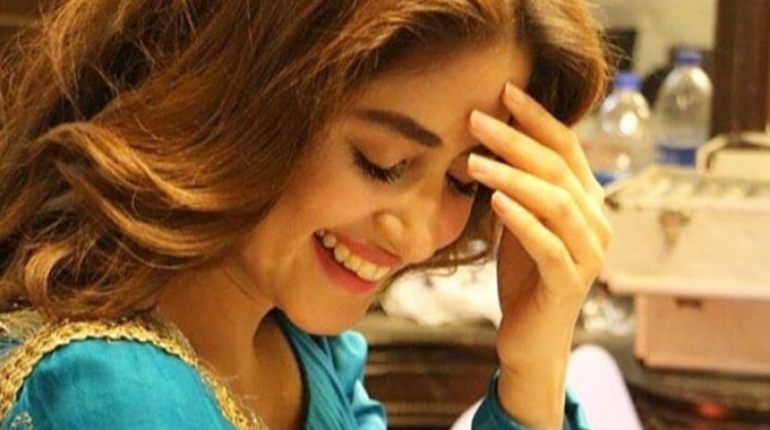 Sajal Aly’s New Look From “Aangan” Will Make You Go ‘Aww’, Already gaining so much popularity amongst the audience prior to its release, the upcoming drama Aangan starring Sajal Aly, Ahad Raza Mir, Mawra Hocane and Ahsan Khan has easily become the ultimate talk of the town!

Due to its star-studded cast, fans simply can’t stop adoring the perfect pictures from its beautiful sets and are eager to know more and more about the periodic drama.

As we are getting closer to the first episode of the much-hyped drama, our excitement seems to increase even more!

This time, yet another look of Sajal Aly from the set of Aangan has made its way on social media and we couldn’t be more overjoyed!

The overflowing cuteness in this picture is bound to make you go ‘aww’!

The starlet looks uber pretty and graceful in this look, her simplicity in this pose is melting hearts of her lovers.

It is no secret that Sajal has got a huge fan following and her followers on social media can’t stop praising her desi diva look!

The involuntary “Haaye” after seeing this picture!

Let’s take a quick throwback to some photos earlier released from the set of Aangan!

Ahad Raza Mir will be seen as “Jamil”!

Jameel and Chammi together!

Sorry I'm a little late, but happy birthday Sajal. And since someone revealed my Jinnah Hat look, here's one from me. Oh and fun fact, this is the same hat my father used in one of his shows. 💥

Ahad and Sajal have emerged out as one of the best on-screen couples and they look adorable together. After Yakeen Ka Safar, the one thing their fans were waiting for the most, was to see Ahad and Sajal together again on the screen.

We simply can’t get enough of these two!

#Repost @ahadrazamir with @get_repost ・・・ The most fun on set is when @sajalaly pulls out the camera. To be continued.

This pre-partition drama is based on the novel, Aangan, written by Khadija Mastoor and is expected to go on air after April.

Our expectations from Aangan are already quite high and we can’t wait for it to hit our screens soon!