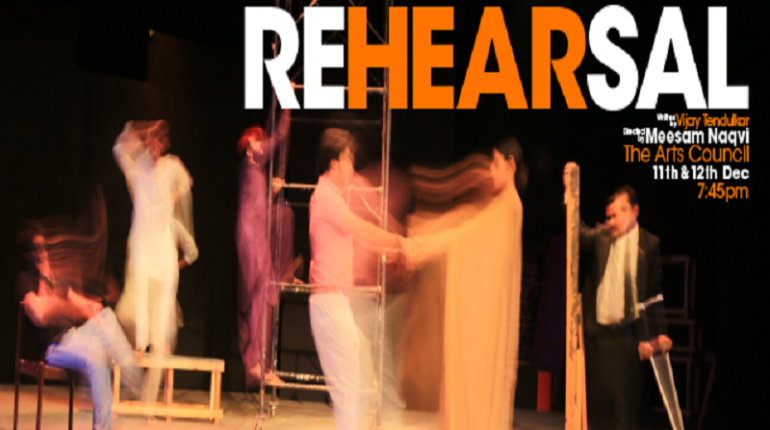 Rehearsal By Stage Nomad Production, A traveling amateur theatre troupe makes an unscheduled stop at a village. As the amusing accusations renovate into more malicious and personal charges, the proceeding takes a serious turn. After repeatedly being reminded of her predicament, the character lady breaks down, revealing the true story behind it all.

Her confession sheds light onto the hegemony and hypocrisy of male cast members who like their counterparts in the society are not blameless themselves, while they still find it easy to point fingers at a woman’s role.

Rehearsal By Stage Nomad Production, Written by Vijay Tendulkar and directed by Meesam Naqvi, Rehearsal will star emerging capacity in the faces of Hammad Ather, Faizan Fazal, Faiza Mehmood and Yogeshwar Karera amongst other very talented individuals. The stage play is all set to show the society, its ugly image by holding a mirror right up to its face, something most people are afraid to do even today.

Rehearsal By Stage Nomad Production, Rehearsal, definitely is a commendable effort on part of the industry veterans and young talent, striving hard together to rekindle the dying fire of Theatre Productions in Pakistan. The play, in its entirety will not only highlight a much-needed social issue but will also bring about a very engaging experience for all theatre enthusiasts, yearning to see fresh new talent try their hands at something new.

Rehearsal By Stage Nomad Production, Based on a taboo, Rehearsal is indeed a very strong play that is all set to take a bold step towards highlighting the judgmental mindset of this society we live in. Here, slut-shaming is common, and those in power utilize every source to crush those below them, whether it is power that comes with position or power that’s accompanied with a privilege of being a man! And that is what the play dares to not only show to this society but also open eyes in the process.