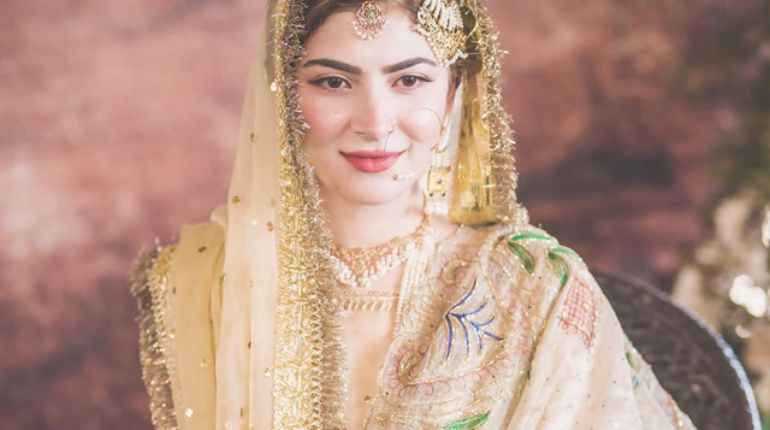 Recently a very pleasing event happened in our Entertainment Industry and that was the Nikkah of most favorite Hamza Ali Abbasi with super gorgeous Naimal Khawar. It was not less than a surprise because there wasn’t any prior hint about this event. As Hamza Ali Abbasi came back after performing Hajj, we got the sudden surprise of his nikkah with Naimal Khawar.

Well we were able to see almost the live coverage of the nikkah ceremony and the social media was bombarded with thousands of pictures of this beautiful couple during the nikkah ceremony. Everyone noticed the simple yet a little old-fashioned look of Naimal Khawar Abbasi. Gossips were there but no one could get a clue why Naimal is looking so simple and old fashioned bride at this special event of her life.

Today while talking to some media and entertainment channel, Naimal revelaed about her old fashioned and very simple look. First she revealed that the dress that she was wearing at her Nikkah ceremony was actually her mother’s dress that her month wore on her Nikkah. WOW! That was so cute then. With little modification and fitting work Niamal was able to wear it on her nikkah day.

Talking about her makeup and hairstyle, Naimal shocked everyone by saying that she herself did her makeup and hairstyle for her nikkah because she wanted to look simple. To give it classier touch, she wore rose garland. What so ever, she was looking stunningly beautiful yet very simple and classic bride as per our traditions and culture.