Home
|
Health & Beauty
|
Health and Nutrition
|
Just you have to Eat Black Pepper Every Day, This is What Happens to Your Body 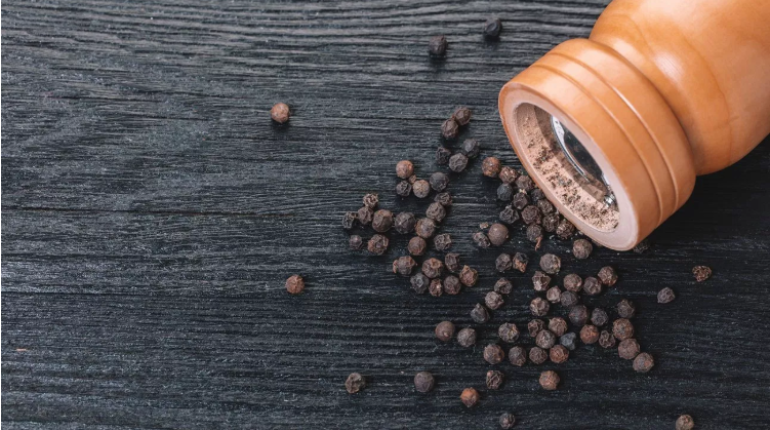 Salt and pepper – it’s the key spice combo that goes in pretty much everything. We tend to use it without really thinking about it, but pepper actually has a host of incredible health benefits. A member of the Piperaceae family, pepper can be processed several ways to produce different results.

Black pepper contains a substance called piperine, which is credited with many of its health benefits. Piperine has been found to reduce your risk of cancer, and the preventative function is twice as strong when pepper is combined with turmeric. That’s because turmeric contains curcumin, which is difficult for the body to absorb without some piperine present.

Pepper also has vitamin C, vitamin A, flavonoids, and carotenes, all potent antioxidants that provide protection against carcinogenic free radicals. Get the best benefit from all that goodness by using freshly ground black pepper on your food after it has been cooked.

It’s piperine to the rescue again, stimulating the stomach to secrete more gastric acid for the digestion of proteins in your food. It stimulates the digestive enzymes in the pancreas, too. Piperine also increases the flow of saliva the first element in digestion along with your teeth.

Easier digestion means more comfort for you as the meal moves out of your stomach faster and easier. With an assist from pepper, you can start using the energy from your food that much quicker.

Not just a tasty seasoning, black pepper is also antibacterial in nature and can help to minimize the impact of a cold and cough. Some people swear by a teaspoon of honey with a bit of fresh black pepper for an all-natural cold remedy.

You can also use honey and pepper in hot water to make a tea rather than take it straight. Pepper can also help to lighten chest congestion when breathed in a steam. Pepper appears to work best for wet coughs rather than dry.

The outermost layer of pepper is full of phytonutrients that work to increase metabolism as they break down fat cells. A study out of Korea even suggests that piperine inhibits the production of new fat cells. You will burn more calories too as the spicy pepper temporarily increases your body’s temperature.

Just a pinch of pepper on your food is enough to get the metabolic benefit and have an easier time dropping pounds. Pepper oil and pepper tea are also great ways to use piperine to support weight loss.

You don’t even need to eat pepper to get some benefits from it. Crushed, it is one of the best exfoliators around. However, don’t rub pepper directly on your skin as it could burn. Mix it into a scrub recipe to encourage circulation and infuse the skin with more oxygen.

But as long as we’re talking about skin, eating pepper has also been shown to slow aging and smooth out wrinkles from the inside out. Pepper is also used in the treatment of vitiligo, which is a condition where skin loses its pigmentation and reveals white patches.

If you’re doing a lot of work to eat healthfully, you want to get the benefit of every nutrient you eat, Pepper can help make that a reality. Piperine, that magical substance, boosts absorption of vitamins and minerals in food. Vitamin B, vitamin C, selenium, and beta carotene in particular are more easily used by the body when taken with some pepper.

That’s helpful because in normal circumstances our bodies absorb only a fraction of the nutrients we take in.

Simply eating pepper on your food can help, but if you would like to apply it topically to sore gums, it can be finely ground and mixed with clove or coconut oil.

Helps painkillers on the right track

Effective pain management is a tricky thing, because the painkillers that work the best are often highly addictive. Piperine seems to help some painkilling medications work more effectively, which may help patient use less. It also supports the efficiency of certain anti-inflammatory medications, such as diclofenac.

Ultimately, the use of piperine in conjunction with pain medication may be able to reduce dependence on the drugs and thereby limit the risk for addiction and other troubling side effects.

Numerous studies indicate that piperine can reduce cognitive malfunction and memory impairment. It is thought that piperine stimulates the chemical pathways in the brain, allowing for better function. Eating pepper may be a good strategy on a daily basis just to think your best, but it is also being looked at for the potential to benefit people with Alzheimer’s, dementia, or other age-related decline in cognition.

Finally, here’s a healthy dietary recommendation that requires almost no effort at all! You are probably already using pepper in most meals. To really push the benefits, buy whole peppercorns and ground them fresh over your food, rather than cook fine powder in your meals as they are prepared. That one little shift could make all the difference in the benefits to be gained from regular consumption of piperine. From home remedies for winter bugs to glowing skin and oh yeah, a lower risk of cancer, this is one habit we don’t ever want to break.

More about this author
Author 322 Posts