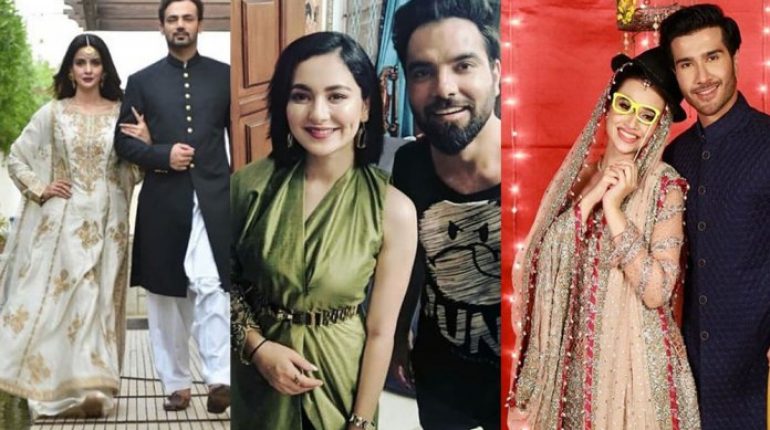 Like every year, there is a long list of telefilms that are going to be aired this Eid ul Fitr. Some have already managed to excite us by their promos and we are sure that these will do their best to keep us entertained. But of course, we just cannot watch all of them so we’ve picked out the best for you guys to watch!

Scroll down and find out!

The hit couple of 2017, Feroze Khan and Sana Javed will be featured in this special telefilm which has been produced by 7th Sky Entertainment.

This telefilm has been penned by notable writer Dr. Muhammad Younis Butt and directed by Mehreen Jabbar.

Dino Ki Dulhaniya will be an unconventional love story of a boy who meets a girl in the process of taking over the family property and falls in love.

The couple became the talk of the town after their super hit drama Besharam.

Helmed by Fahim Burney and written by Faiza Iftikhar, this upcoming telefilm is a laughter ride in which Saba Qamar will be playing the role of a fun loving girl. On the other hand, Zahid Ahmed will play the role of a writer.

Go To Hell On HUM TV

This Eid, Hania Aamir is coming with a new telefilm on Hum TV titled Go To Hell. Featuring a stellar cast of Yasir Hussain, Nouman Masood, Zainab Qayoom and Nazli Nasr, it has been directed by Misbah Khalid.

Go To Hell is the story of the clash between two people belonging to different class statuses.

Although much has not been revealed about this telefilm, we are assuming that this telefilm will be a romantic comedy and will be a treat of this Meethi eid for the Pakistanis.

We absolutely love the chemistry between Ushna Shah and Shahzad Sheikh. Helmed by Ahmed Bhatti, this upcoming telefilm is written by Mohsin Ali.