Ayesha Omer is a Pakistani Actress, Model and Singer, who was born on 12 October 1981 in Lahore, Pakistan. She Established herself as a one of the Top Actress and Model of the nation. She has been acted in many Films and Television Series. some of her Notable Roles as Khoobsurat in Bulbulay, Natasha in Ladies Park, Sara Roles in Zindagi Gulzar Hai, Arzoo Role in Tanhai and Aleena Role in Dil Apna Aur Preet Parai. After the success of show Kollege, Ayesha Omer bagged a role of host in a show known as Rhythm. Rhythm used to air on Prime TV. Ayesha Omar would interview the musicians and singers of Pakistan. Arif Lohar and Shazia Manzoor were also included. Fashion model Ayesha Omer also hosted cooking show Hot Chocolate on ARY Zauq. Currently, she is hosting Ye Waqt Hai Mera that airs on CNBC Pakistan.

Recently, Ayesha Omar was spotted at a wedding event. She was dazzling in saree and looking so perfectly beautiful.

Have a look at the beauty! 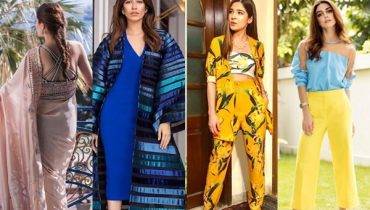