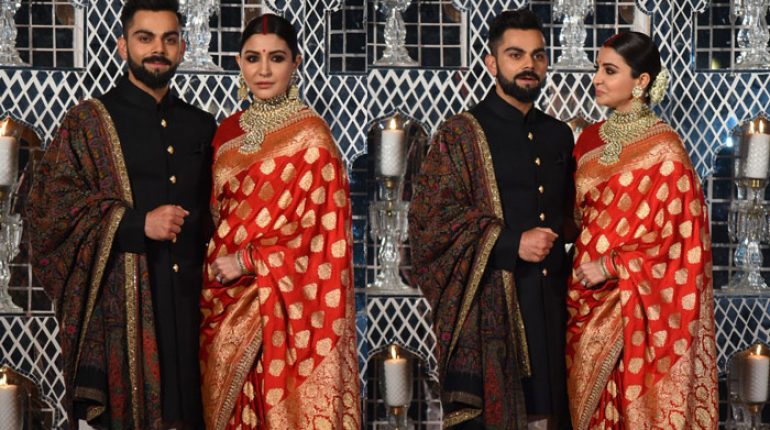 Following their wedding functions in Italy which were kept private and away from the privvy eyes of the media, Virat Kohli and Anushka Sharma returned to the capital. After some pictures emerged of Anushka meeting Virat’s sister and family with plenty of laughter all around, the newly married couple and the families hosted political bigwigs and extended friends and family at the reception in Delhi on Thursday. The couple had married in the picturesque Tuscany on December 11. Anushka And Virat Kohli Dance At Their Wedding Reception.  The reception held at the Durbar Hall of Taj Diplomatic Enclave saw many political heavyweights join in the celebrations but possibly none bigger than Prime Minister Narendra Modi himself. Virat and Anushka had met and extended the Reception Invite to PM Modi which was duly accepted. Other attendees included Suresh Raina and Shikar Dhawan.

Anushka And Virat Kohli Dance At Their Wedding Reception

Anushka Sharma and Virat Kohli returned to India after their fairytale wedding in Italy’s beautiful city Buoncovento, where they will be hosting numerous wedding receptions and parties to celebrate their union. Anushka And Virat Kohli Dance At Their Wedding Reception. Their first official wedding reception took place in Delhi last night, with both lovebirds looking utterly breathtaking. Hashtag ‘Virushka’ took Instagram by storm as pictures of the fine reception surfaced online. The couple looked delighted as they welcomed guests on a set stage.

Anushka And Virat Kohli Dance At Their Wedding Reception

I don’t think Indian brides feel complete without wearing the colour red in one of their functions. Anushka decided to wear red on her reception. And much to my absolute delight, it would be a red Benarasi saree. From the by-lanes of Peeli Kothi in Benaras. I was particularly excited about this look because I have seen an entire generation of Bengali women getting married in red Benarasi sarees. The red bindi, the sindoor and the mogras in her hair just made the look more potent and powerful. She chose to wear heritage uncut diamond choker and jhumkas from the Sabyasachi Bridal Jewelry collection. Bollywood can play a major role in spreading awareness about Indian textiles and handlooms. And I must say the occasion couldn’t be better. I know copies of this saree will flood the entire country in the next few months to come, which also means that a million weaver’s children will be back at school. All I can say is thank you Anushka! Virat chose to complement his new bride in a very subtle and elegant manner. He wore a black textured silk signature bandhgala with the house buttons in 18k gold and a white silk kurta with hand-woven brocade churidaar. He teamed it with mojris from the Sabyasachi accessories line and a hand-embroidered antique Pashmina shawl from our ‘Kashmir Revival’ project. @anushkasharma @virat.kohli @bridesofsabyasachi @groomsofsabyasachi @tajdiplomaticenclave For all jewellery related queries, kindly contact [email protected] #Sabyasachi #TheWorldOfSabyasachi #SabyasachiJewelry #AnushkaSharmaViratKohliReception #Virushka #AnushkaSharma #ViratKohli

Indian Prime Minister Narendra Modi attended the reception and adoringly gifted the couple two roses. Anushka wore Sabyasachi once more for the Delhi reception, as did beau Virat. Both complimented each other wonderfully in traditional attire. While the wedding reception was a fitting affair, it was nothing compared to the after party. The couple rocked it out as famous Punjabi singing legend Gurdas Maan serenaded them. Anushka And Virat Kohli Dance At Their Wedding Reception. The couple let loose and whipped out their best dance moves, with Anushka dancing like no one’s watching. And Virat too crawling out of his shell and lighting up the dancefloor. We’ve said this before but we say it again, COUPLE GOALS ALERT.What did you think of the couple’s. 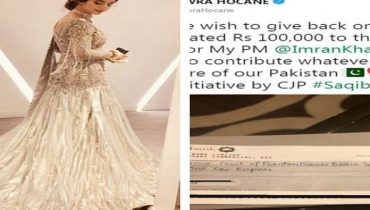 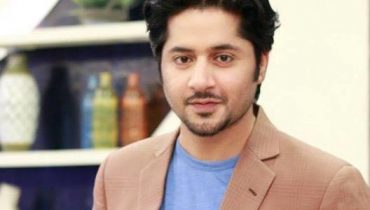